Where are the Stars? 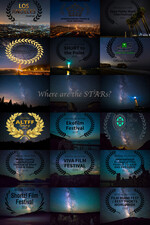 A short film on how light pollution affects the view of the night sky. It shows how the view gets progressively better as the light pollution reduces (from Los Angeles to Great Basin desert).
Thanks to darksitefinder.com on finding the locations. Traveling and shooting at every level of light pollution was a challenge. Furthermore, I was mostly alone in some of the locations, which is a bit scary because of the presence of wildlife (bear, mountain lion, snake). Despite the challenge, I was awestruck by the beauty of night sky at very less polluted areas.

Most of us live under heavily light polluted skies, and some people have never even seen the Milky Way. During a 1994 blackout, L.A. residents called the observatories when they saw the Milky Way for the first time. Although we can't imagine popular cities like L.A. and Manhattan almost dark upon nightfall, we can limit the light pollution specially the sky glow. Sky glow is the result of light directed upward instead of where it is most useful: on streets and homes. Thus most of a city’s artificial light is wasted anyway.

We are losing our connection with the night sky, which provided us with wonders like Stonehenge, the Pyramids of Giza and the Mayan calendar. It also keeps our overworked, politicized lives simple, and makes us kind, thoughtful. Astronomer Neil deGrasse Tyson said: “When you look at the night sky, you realize how small we are within the cosmos,” “It’s kind of resetting of your ego. To deny yourself that state of mind, either willingly or unwittingly, is to not live to the full extent of what it is to be human.”