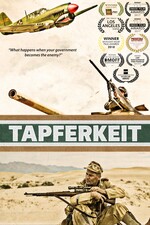 During the WWII North African campaign, a German sniper of the AfrikaKorps and a U.S. Combat engineer find themselves the sole survivors of a battle. They must reluctantly join forces to escape a marauding band of desert nomads and the unforgiving desolation of the Sahara desert. During their odyssey, the German relates the destruction of his country due to following their corrupt politicians. He regrets not stopping them before it was too late. It's a specter from the past that sadly parallels many aspects of our society today. The German soon realizes his own government is the real enemy of his people and struggles to find the courage (Tapferkeit) to stop them.