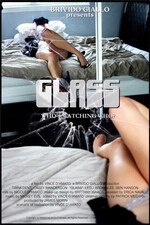 OFFICIAL ORIGINAL TRAILER (1min/33seconds) ie- **Mash-up 'crazy' teaser (1min/12seconds) to the right** “Horror is at its best when its about something else...” ~Sandy King, film producer. Sex, conspiracy and violence explode in GLASS, the second installment of Vince D'Amato's neo-giallo series. Tirra Dent plays Zarana, a woman consumed by paranoia and rabid nightmares after she witnesses her neighbor's murder. Soon, she finds herself relentlessly stalked by the enigmatic killer. Set in the "glass jungle" of Vancouver's gentrified neighborhoods, Glass is a scathing critique of social media and the society of middle and lower classes.